When is the tactical gaming world going to get a truly inspirational massively multi-player online (MMO) gaming experience?

Didn't someone try that?

World War II Online (WWIIOL) seemed more like a crass attempt to cash in on the RPG craze by allowing grog-geeks to live out their fantasies in first person combat rather than attemping to model the Second World War in anything like realistic terms. Other games have followed on a smaller scale, such as Operation Flashpoint and Red Orchestra - and the concept works when you can mold squads of men willing to put in the effort and the discipline and the training to do what real soldiers do - dedicate themselves to learning standards of conduct and subordinate themselves to the good of the team. But to expect 30,000 "team players" to do the same is ludicrous.

Battlefront.com and Hunting Tank Software have agreed to join forces and provide something unique - well, not totally unique, as Muzzle Velocity did this about 8 years ago or so: provide an operational level layer to a tactical 3D game, in this case, their venerable old title Combat Mission: Barbarossa to Berlin. They've been at it for at least 8 years, according to their website. A look at the screenshots isn't promising; the interface is reminiscent of Soldiers at War, the old SSI clunker which uses a 3/4 view in 3D instead of a standard map and NATO symbols with which to command regiments, battalions and companies around hundreds of square kilometres of real world terrain, generating battles resolved in Combat Mission. Not a horrible idea, but there will be no front lines, just blocks of kilometre-square tiles held by opposing forces, no view of the actual terrain from the operational map, and apparently a host of other problems that keep delaying this program further and further.

Isn't it time for a truly unique MMO? Why not find a developer out there who will marry up their tactical game to a true operational level online environment that will do this: 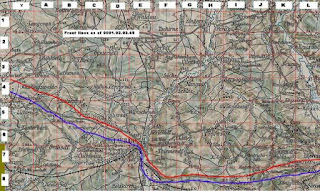 If nothing else, the success of manually-run "meta-campaigns" have proven the concept of an MMO works. And they were run for free.

It was simple, as far as Combat Mission went. A group of players went out and researched a real life battle, and found real world geographical data - the above map came from the fighting around Lauban in early 1945, courtesy Stefan Korshak. The group sussed out the orders of battle involved in game terms and banged out the maps, a portion of which, in CM terms, are shown below: 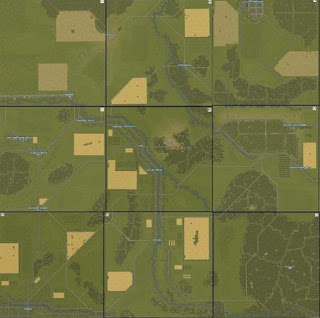 Like all meta-campaigns, the rules had to be agreed on and administered by mutual agreement and the campaign was labour intensive. But the concept was valid and proved it could be done. A couple dozen players rotated in and out of the game as real life intervened - and no money changed hands, nothing was automated.

My final word
With a profit incentive, and given the popularity of such games as World of Warcraft, Lord of the Rings Online and others in the fantasy genre, it would be interesting to see if a true operational level game married up with a tactical level game couldn't prove as lucrative for a developer enterprising enough to try and make it a reality. Certainly, for those stalwart few who have meta-campaigned their way through a few CM games, the interest has been there.

Posted by M.Dorosh at 9:04 PM 3 comments: Links to this post