The wargaming world - or at least, the small part of it I frequent - is eagerly anticipating the release of Battlefront.com's first World War II themed game designed with their new second generation Combat Mission engine - Combat Mission: Battle for Normandy. Not only because it has been going on 8 years since the last CM title set in the Second World War, but because squad-based, company level, turn based, 3D tactical games for the PC from any publisher have been few and far between. The only other game in town is Panzer Command, though a long-awaited - and major - update to that series is in the works, called Ostfront.

So, one might ask, why go back to the same well with Normandy? It's a popular subject. In the last three years alone, there have been several major game releases set in Normandy for a variety of game systems, including miniatures (Flames of War, for example), board games (particularly Advanced Squad Leader, whose published scenarios and "historical" modules outnumber every other game system, the proportion of those set in Normandy probably reaching over 10% and possibly even one in five).

There are a number of reasons that Normandy fascinates - beyond even the fact that pop culture has made it "popular" with Saving Private Ryan and Band of Brothers. The earliest Normandy-exclusive game treatments pre-date these films.

a) unique circumstances: the initial entry onto the Continent was by the largest invasion in history (Sicily involved more formations, but D-Day was grander in overall scope). You had paratroopers, landing craft, cliff assaults, swimming tanks, "funnies", and devious devices by the Germans to combat all this.

b) balanced forces: Allied and German formations in Normandy were a mix of veteran and green divisions on both sides, and even the experienced divisions were a toss-up between "battle-hardened" and just plain "battle-weary." The 82d Airborne fought hard, drawing on its experience on Sicily, while other veteran divisions like the 51st Highland or 7th Armoured were criticized for lack of drive when it was expected their cadre from the North African battles would help them lead the way.

c) unique terrain: particularly in the American sector, the bocage country has been described in countless personal accounts. The Normandy hedgerows, with deep ditches flanking thick hedges laced with impenetrable roots and surmounted by tangles of trees and bushes, lining small fields for miles inland of the U.S. beaches, made hard-going for infantry on the assault. The troubles began on June 6th for U.S. paratroopers and the Germans tapped to counter-attack the invading forces, and the hedgerows became a steady trial for weeks. New tactics had to be devised, defensively and offensively, and American ingenuity developed new equipment for the problem as well.

The existing literature on finding the "best" tactical level wargames is scarce. Certainly in print, there is little to guide the prospective gamer.In an appendix to the book “Normandy 1944”, entitled “Wargaming Normandy”, Dr. Stephen Badsey tells us the following:

...a table top representation of the notorious Normandy bocage will deliver a sobering lesson n the difficulty of piercing a dense defensive line in close country (and) board games proved a ready packaged alternative (to miniatures) – especially in respect of squad- and platoon-level combat. The appropriately named Squad Leader and Advanced Squad Leader series of games are particularly popular and offer clearly D-Day orientated scenarios as Paratrooper and Hedgerow Hell. These games, however, offer only 'typical' scenarios, and the wargamer wishing to re-fight the numerous small actions of D-Day and its aftermath will have to suffer the satisfaction of doing his own research. (Normandy 1944, Osprey Publishing, ISBN 0-85045-921-4)

Dr. Badsey may refer to the use of geomorphic mapboards but all ASL scenarios are based on actual events, not “typical” scenarios. (He's wrong about "Squad Leader" being an appropriate name for a company-level game, also, but I digress.) He is correct in that a large number of games have included "bocage" rules to simulate the Normandy fighting - as far back as Armor, and carrying on through G.I.: Anvil of Victory, Advanced Squad Leader, Combat!, Advanced Tobruk System, Valor &Victory, Lock 'n Load and Combat Commander to name the squad-based ones. Platoon-level games include PanzerGrenadier and PanzerBlitz: Hill of Death for which a "Carentan" mini-game was published in the Special Edition #2 of Operations in 2009, not to mention the Tactical Combat Series, which has an Omaha Beach title in print and has a second title in Normandy planned, dealing with the Canadians on the Caen front. Even man-to-man games got in on the act with Hetzer, the Sniper! add-on, which had a "hedgerow" map.

The most detailed treatment of bocage is without a doubt ASL, with large sections of text devoted to "Wall Advantage", the Culin hedgerow device, and detailed LOS examples. A recent scenario offering, or "Action Pack" as their publisher calls it, provided several scenarios and bocage-heavy maps set in Normandy. A couple of third party offerings by Bounding Fire Productions offer some boards and scenarios (Beyond the Beachhead), and as well an extended article on understanding the complex bocage rules (contained in Operation Cobra).

Most other rules, however, seem to either ignore the bocage altogether (including many miniatures sets) or simply treat the bocage as a super-wall and leave it at that, adding a +1 modifier to fire traced through it or adding a half level of height and increasing its ability to block Line of Sight. 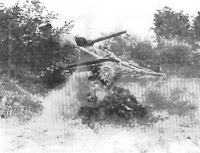 On the computer, Combat Mission: Beyond Overlord attempted to deal with the tactical problems of the bocage country and the advantages of the Culin hedgerow device - lengths of steel girder welded to the front hulls of tanks and used to batter their way through the hedges in order to avoid exposing their vulnerable underbellies to German anti-tank fire. But the programming challenges were many, and the solutions were simplistic: breaches weren't created, all tanks were simply assumed to have the devices, and the 20 metre terrain tiles meant that the tight Normandy terrain really wasn't simulated well - and neither were the defending machine guns in that earliest incarnation of the first generation game engine.

And so, eyes look to Battlefront.com as they go back to Normandy - bets are on for the late spring or early summer of 2011 now, as evidenced by chatter on the official forums, which are following a hotly contested match between two beta testers duking it out for public consumption. Memories of Close Combat's spinning tanks and the turn-based silliness of Steel Panthers and the long wait for Panzer Command to come to the Western Front leave little choice for the computer enthusiasts. Board gamers and miniaturists have been feasting for years, with Flames of War's constant stream of Normandy offerings and goodies such as Purple Heart Draw to please the ASL crowd.

If nothing else, the CM scenario designers will have a lot of inspiration to draw on - when the time comes.

My question to you

Can Normandy ever really get old? I think it probably could, but not until it has been done right. We're still waiting for that day on the PC.